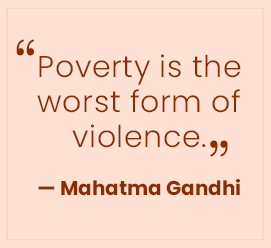 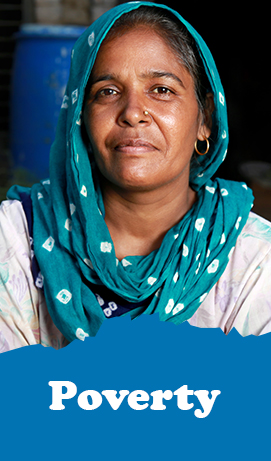 Is there any solution to reduce Chronic Poverty in India?

Poverty has multiple forms, such as lack of food, clothes, shelter, education, hygiene, clean water, and the poor are at the risk of denying their rights. Decades onwards, they suffer from poverty and remain poor forever, bypassing the poverty heritage to their future generations. People in rural areas are the victims of poverty. Whatever the problem they face, that is related to their deprivation of resources and money. We need to raise the living standards of the people living in rural areas by embedding anti-poverty components in the villages or remote locations. Most poor household’s next generations are also poor, and the intensity is more severe than the ancestors’. They are restricted access for the minimum needs of a comfortable living.

Relationship between Poverty and Income Inequality

In India, we have two burdens called religion and caste, and poverty takes the next position. Coming to 2020, the government is serious about poverty eradication, and many more nonprofits took the initiative to end poverty in India by 2030. With the existence of many poor communities in our country, poverty has risen, and the income-earning potential of individuals taken as one of the variants to measure poverty in India. From 2004-05 to 2011-12, the poverty line has decreased, wherein the period from 2011-12 to 2017-18, the poverty has increased. Coming to 2020, we can’t estimate the severity of poverty as we are too busy with suffering and defeating the pandemic and its conflicting conditions. Right now, India is suffering from chronic poverty. We need to add something more to our efforts to eradicate poverty from the nation successfully. If we didn’t take preventive steps to remove poverty, then 111 Billion Indians would soon become poor.

The poor people depend upon nature and the forest for survival and livelihood. They can’t handle unforeseen personal emergencies and disasters. We need to care for their health as poor people don’t have sufficient money to treat their health diseases; in some cases, low-income people are dragged to poverty by spending money from their own pockets on healthcare. Tulsi Healthcare Movement of ISFH Foundation enables the below poverty line people to get free health benefits for treatment, medicine, and related health expenses.

Hunger and malnutrition are shaking the nation due to the pandemic. The jobs are lost, and many days the country went on lockdown. It has impacted every individual, but the poor are severely affected due to their livelihood complications. Child mortality, child stunting, and maternal deaths are majorly due to malnutrition. Twenty-five thousand average hunger deaths are daily happening in India. If these conditions are not improved, then soon we’ll become a poor country. ISFH Foundation has launched Janaki Feeding Movement to feed the hunger victims in India by supplying nutritious food for a full day.

Education plays a vital role in improving the livelihoods of low-income families; the educated children can overcome poverty after getting into a dignified job. ISFH Education Movement helps poor children to receive a quality education by releasing funds for education and education-related expenses. Hence they can overcome income inequality in the future. Join ISFH Foundation to help the poor and needy amid calamities, disasters, and crises and remain a helping hand with your humanity.